About us : Wages for Housework and the Global Women's Strike 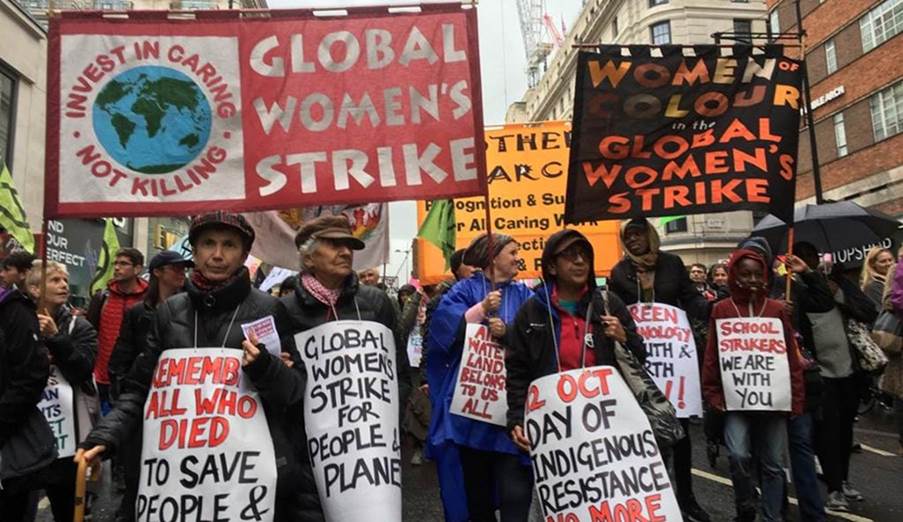 We are an international grassroots network campaigning for recognition and payment for all caring work, in the home and outside. Mothers and other carers are entitled to a living wage – in cash, land, non-polluting technology…

Corporate greed and military conquest are impoverishing us, destroying the climate and the world. We campaign for a caring economy where human beings and all life are central, not a means to an end.

*A NEW WAY OF ORGANISING

Wages for Housework is a demand, it is also a perspective, a way of organising from the bottom up, of autonomous sectors working together to end the power relations among us – a ‘fusion’ (to use the US Poor People’s Campaign word).

*INVEST IN CARING NOT KILLING

The caring work women do produces and reproduces the workforce, in fact the whole human race. It should be a source of power for women. Instead it is used to exploit and impoverish us.

To escape poverty and financial dependence, women have fought to enter jobs and careers previously reserved for men. Some have risen in the capitalist hierarchy but most have not, especially mothers, so we are still the poorer sex.

And the status of caring work – vital to survival and wellbeing – has hardly changed. It is still unpaid or low paid. Some of the financial recognition mothers had won – welfare, Family Allowance / Child Benefit, Income Support has been rolled back.

*A LIVING WAGE FOR MOTHERS AND OTHER CARERS

Our demand for a living wage for mothers and other carers presumes that human beings and all life on earth must become the aim of every policy and development. It is an anticapitalst perspective.  Climate justice campaigners are now now calling for a Care Income for those doing the work of caring for people and planet.