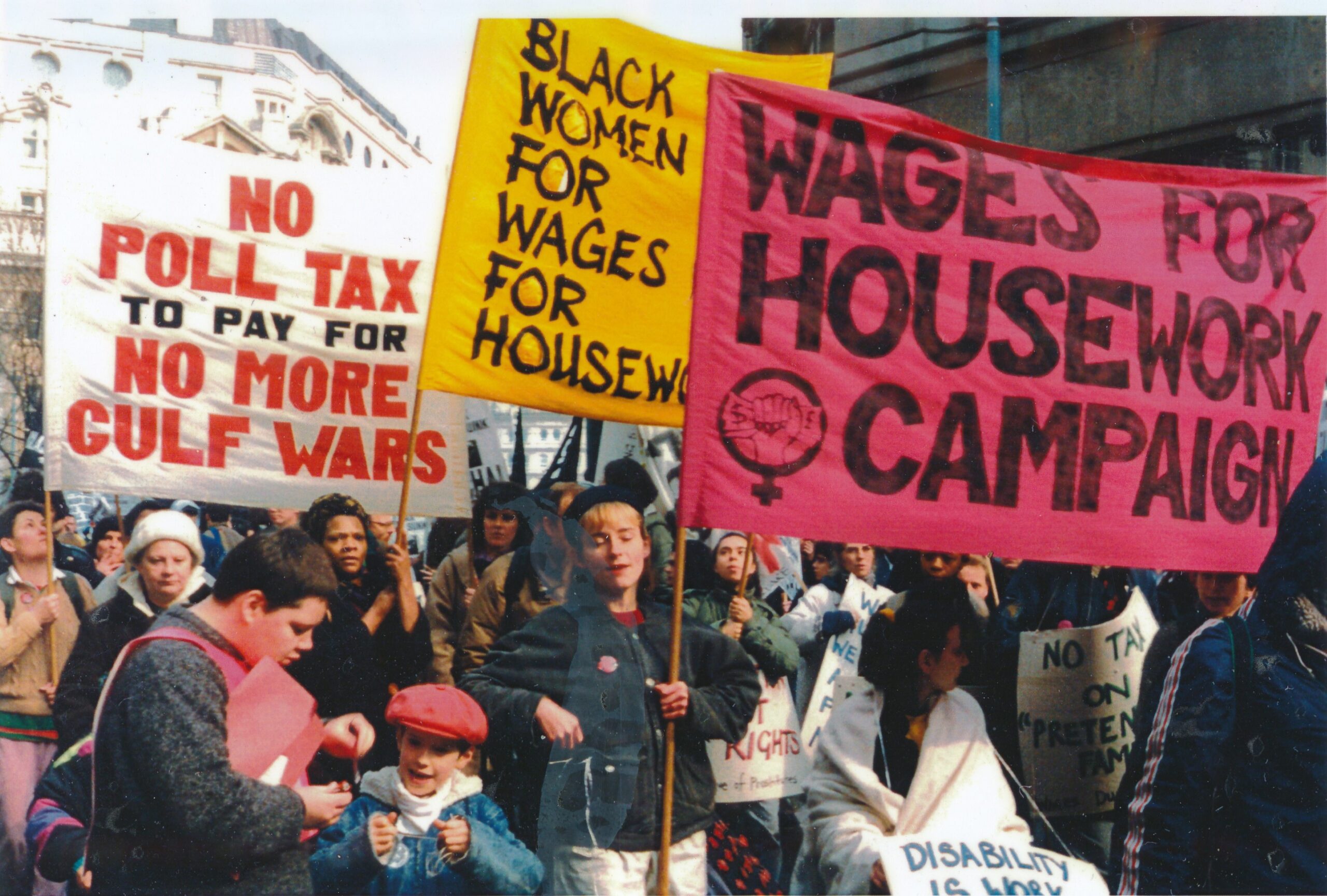 Wages for Housework is a demand, it is also a perspective, a way of organising from the bottom up, of autonomous sectors working together to end the power relations among us.

The caring work women do produces and reproduces the workforce, in fact the whole human race. It should be a source of power for women. Instead it is used to exploit and impoverish us.

To escape poverty and financial dependence, women have fought to enter jobs and careers previously reserved for men. Some have risen in the capitalist hierarchy but most have not, especially mothers, so we are still the poorer sex.

And the status of caring work – vital to survival and wellbeing – has hardly changed. It is still unpaid or low paid. Some of the financial recognition mothers had won – welfare, Family Allowance / Child Benefit, Income Support has been rolled back.

*A LIVING WAGE FOR MOTHERS AND OTHER CARERS

Our demand for a living wage for mothers and other carers presumes that human beings and all life on earth must become the aim of every policy and development. It is an anticapitalst perspective.  Climate justice campaigners are now now calling for a Care Income for those doing the work of caring for people and planet.

Selma James in Hunger Magazine “READ THE MOST INSPIRING QUOTES FROM THE WOMEN OF HUNGER 14” “In the recent months what has happened is that women in prominent positions have complained about what they suffer, and that has been very useful. It can be even more useful when they include the rest of us in…

WHAT WOMEN WANT 2.0 EQUAL PAY: SELMA JAMES Co-ordinator of the Global Women’s Strike and author of Sex, Race & Class – The Perspective of Winning “[I want] wages for housework. Equal pay. Safety from violence and bullying.” Equal pay was a defining theme in the responses to the What Women Want 2.0 survey, showing…

A life in writing: Selma James in The Guardian

Books A life in … A life in writing: Selma James ‘By demanding payment for housework we attack what is terrible about caring in our capitalist society’ Becky Gardiner Fri 8 Jun 2012 22.45 BSTFirst published on Fri 8 Jun 2012 22.45 BST  Selma James describes the frustrations of women’s lives. Photograph: Eamonn McCabe for the Guardian The last time…

Selma James and Melissa Benn in The Guardian

Gender Home truths for feminists How should the work women do as mothers be rewarded? Selma James and Melissa Benn argue about carers and careers Selma James and Melissa Benn Sat 21 Feb 2004 10.30 GMTFirst published on Sat 21 Feb 2004 10.30 GMT Hi Selma, You were probably as surprised as I was to see recent reports that Michael…

“Labours of love, or maybe just a rip-off”, The Times

Video: People for Tomorrow Selma James Our Time is Coming

“Selma James, a socialist and feminist, uses her own experiences working in low-paid jobs and being a mother and housewife as a starting point in this investigation into whether women are exploited in all areas of society. Interviews with full-time housewives, and with females who work outside the home but still do almost all of…