Out now! The much-anticipated new collection by SELMA JAMES

Our Time Is Now: Sex, Race, Class, and Caring for People and Planet.

Selma James, who launched the International Wages for Housework Campaign (WFH) in 1972, will be 91 this August. She was recently honoured with the Sheila McKechnie Long-term Achievement Award. WFH will be celebrating its 50th anniversary in March 2022.

Get a copy of Our Time Is Now from: crossroadsbooksonline.net
the grassroots publisher based at the Crossroads Women’s Centre. 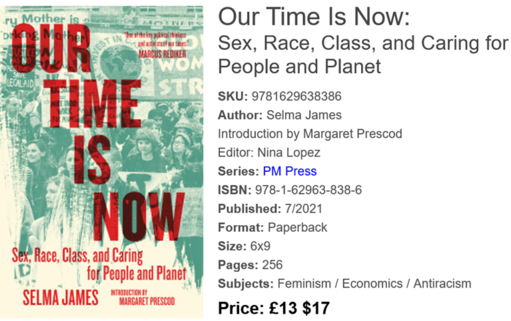 For over sixty years, Selma James has been organizing from the perspective of unwaged women who, with their biological and caring work, reproduce the whole human race—whatever else they do. This work goes on almost unnoticed everywhere, in every culture. It is not prioritized economically, politically, or socially, and women are discriminated against and impoverished for doing it.

This much-anticipated follow-up to her first anthology, Sex, Race, and Class, compiles several decades of James’s work with a focus on more recent writings, including a groundbreaking analysis of two of CLR James’s masterpieces, The Black Jacobins and Beyond a Boundary, and an account of her formative partnership with him. Her experience in the movement for Caribbean federation and independence is reflected in her introduction to Ujamaa, the socialism that Tanzanian villagers built, and in her work with Guyana, Haiti, and Venezuela.

Steeped in the tradition of Marx urging the need for a “practical movement,” James recounts the unusual history of how autonomous organizations formed within the International Wages for Housework Campaign and reshaped it. Women of colour, queer women, sex workers, women with disabilities . . . each independent but mutually accountable (including to the men’s network with whom they work) as they confront sexism, racism, deportation, rape, and other violence.

James makes the powerful argument that the struggle for climate justice can draw on all the movements people have formed to refuse exploitation and to end the capitalist hierarchy that is destroying the world. There is one continuum between the care and protection of people and of the planet. The care income she campaigns for prioritizes both. Our time is now.

“Selma James is a force of nature in the flesh and on the page. She fearlessly grapples with complex ideas, but her writing remains crystal clear and compelling. Stop what you are doing and read her now!”
—Maya Oppenheim, women’s correspondent, the Independent, UK

“When Selma James speaks, I listen. When she writes, I read. She has been a crucial part of my reeducation for decades. She is one of the few public intellectuals that engages with issues and people all over the world yet still remains connected to the grassroots. The writings and ideas of Selma James are as relevant now as they have ever been. Her solidarity knows no borders, her compassion excludes no sufferer.”
—Benjamin Zephaniah, poet, writer, lyricist, musician, and naughty boy

“One of the most important figures in the new way of thinking in the 1970s and 1980s was Selma James. James’s Marx and Feminism deserves to be considered one of the great feminist contributions to Marxist thought.”
—Monthly Review

“. . . An intellectually ambitious attempt to synthesize Marxism, feminism, and post-colonialism, not with the usual sellotaped hyphenations.”
—Jenny Turner, London Review of Books

“Selma James is a treasure . . . one of the key political thinkers and activists of our times.”
—Marcus Rediker, author of The Slave Ship

“In an era where women are encouraged to ‘lean in’ to capitalism and power, Sex, Race and Class provides a much-needed reminder that house work and care work are work—and deserve to be recognized and compensated as such. James not only details women’s campaigns that might otherwise be forgotten, but provides a valuable blueprint for organizing towards a truly liberated society.”
—Victoria Law, author of Resistance Behind Bars: The Struggles of Incarcerated Women

Selma James is an antisexist, antiracist campaigner. In 1972 she put forward Wages for Housework (WFH) as a demand and a political perspective that redefined the working class. The International WFH Campaign she founded coordinates the Global Women’s Strike. She coined the word “unwaged,” which incorporates all workers without wages. She coauthored the classic The Power of Women and the Subversion of the Community and is the author of other pathbreaking writing.

Margaret Prescod, author of Black Women Bringing It All Back Home, is coordinator of Women of Color in the Global Women’s Strike and an award-winning, nationally syndicated journalist on Pacifica Radio. She is the founder of the Black Coalition Fighting Back Serial Murders and cofounder of Every Mother Is a Working Mother Network. She is originally from Barbados.

Nina López is the joint coordinator of the Global Women’s Strike. Her writings and edited volumes include: Prostitute Women and AIDS: Resisting the Virus of Repression; Some Mother’s Daughter: The Hidden Movement of Prostitute Women against Violence; The Milk of Human Kindness; and Creating a Caring Economy: Nora Castañeda and the Women’s Development Bank of Venezuela. She is originally from Argentina.

Click here for one-page information sheet on this book