Joint statement issued on 30 December 2022 by grassroots organizations and trade unions in Peru, including Huelga Mundial de Mujeres/Global Women’s Strike, condemning the coup and the horrendous repression against protestors. The government declared a state of emergency and suspended all rights and guarantees, allowing the police and military to kill with impunity. The resistance continues as many more people are murdered by the State – the names of some of the at least 17 people killed, including a 17-year-old girl and a doctor, in the Indigenous city of Juliaca, Puno, on 9 January 2023 are listed after this statement. For more information see: https://www.facebook.com/HuelgamPeru/

LET’S KEEP UP THE STRUGGLE AGAINST THE DICTATORSHIP OF
DINA BOLUARTE, CONGRESS AND THE MILITARIZATION OF THE COUNTRY!

The signatory organizations, in the face of the tragic events which took place in our country, declare the following:

We reject the State of Emergency decreed by Dina Boluarte, which intends to silence social protest, resorting to repression with blood and fire by the national police and the armed forces. The brutal repression has caused the death of 28 people and dozens of wounded in different regions of Peru, where the most humble sectors, who have been harmed by the neoliberal policies of the last 30 years, are located. We demand justice for the families of our murdered loved ones and exemplary punishment for those responsible for this massacre.

We condemn the persecution and the “terruqueo” [false accusations of terrorism] against people who protest. We denounce before the whole world the serious violations of human rights perpetrated in our country under the complicit silence of the monopoly press. We express our solidarity with our peasant brothers and sisters after evidence was planted to prosecute them for “terrorism”. There is no legal protection for those of us in struggle under this new dictatorship imposed by Dina Boluarte – who does not represent women or the people – and by the rightwing who controls the Congress of the Republic.

We reject the agreement adopted by the Congress of the Republic in order to remain with Dina Boluarte until July 2024, with the intention of bringing in political reforms that serve their interests, organize future electoral fraud and keep the country under the control of the groups that hold power.

We salute the example of struggle of the various regions which have risen in protest and call on all the people to continue to organize and mobilize to defeat this dictatorial government and this corrupt and coup-plotting Congress.  We demand a popular and sovereign Constituent Assembly, as part of the structural changes that the country requires, and we defend the right of the people to decide by referendum. The people already know that without struggle there are no victories.

Dina Boluarte and coup-plotting Congress out!
A Constituent and Sovereign Assembly of the People!
See signatories at the end of the joint statement in Spanish 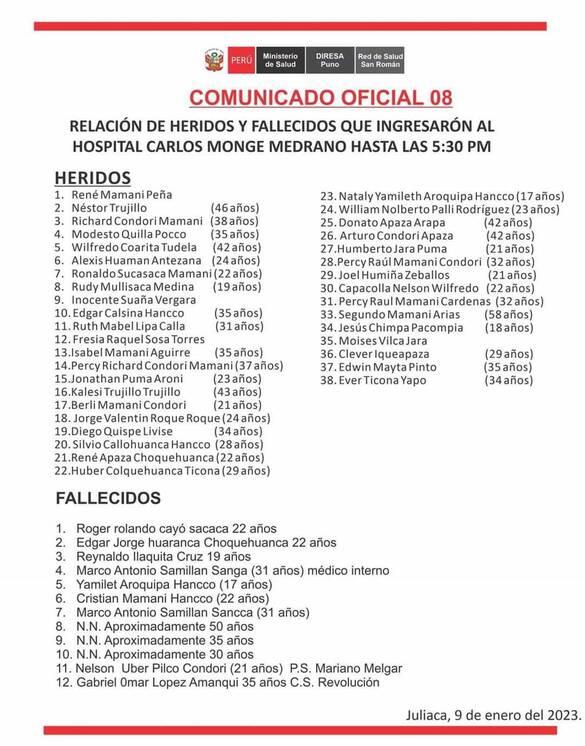