Women from Singapore, currently living in the UK and people from the Global Women’s Strike network in Malaysia are asking for support to stop the execution of a man with learning disabilities. He has been sentenced to death in Singapore for a non-violent crime. 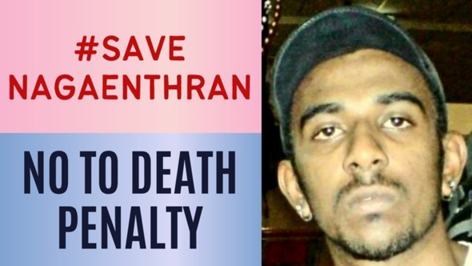 Singapore is planning to execute an intellectually disabled man on 10 Nov 2021.

Nagaenthran, a Malaysian man with borderline intellectual functioning, was arrested for drug trafficking at the age of 21 in 2009. The following year, he was convicted and sentenced to death. During his forensic psychiatric evaluation, Nagaenthran was assessed to have an IQ of 69 – a level internationally recognised as an intellectual disability; impaired executive functioning; and ADHD. Having been on death row for over a decade, he faces imminent execution on 10 November 2021. Nagaenthran’s family in Malaysia were only given two weeks notice that the death sentence would be carried out.

While on trial, Nagaenthran testified that he had been coerced by a man who assaulted him and threatened to murder his girlfriend. Dr Ung Eng Khean, a psychiatrist in private practice, submitted that Nagaenthran was suffering from “an abnormality of mind at the time of his arrest”. According to Singapore law, this should have been sufficient grounds for him to be acquitted or released from charges. However, the defence was dismissed despite psychiatric evidence highlighting Nagaenthran’s inability to make rational judgments and decisions; assess risk and consequences; as well as control his impulses.

The execution of a mentally ill person is prohibited under international human rights law, as well as under the United Nations Convention on the Rights of Persons with Disabilities (UNCRPD). Furthermore, any execution for drug offences contravenes international law and standards. As a signatory of the UNCRPD, the Singapore government runs the risk of violating its obligation towards “ensuring that persons with disabilities are treated equally with dignity and respect”.

Capital punishment is often defended on the grounds that the government has a moral obligation to protect the safety and welfare of Singaporeans. However, Nagaenthran’s death sentence indicates that the Singapore judicial system is failing to protect the safety and welfare of those with disabilities. Specifically, it demonstrates the systemic failure of Singapore’s criminal justice system to recognise the impact of intellectual disabilities on a person’s culpability and capacity to commit a criminal offence.

Nagaenthran’s legal team in Singapore have exhausted all court appeals including an appeal to Singapore President Halimah Yacob for clemency. However, they have just managed to secure a hearing at the High Court on 8 Nov 2021, 2.30pm SGT for a judicial review and constitutional challenge. They will also be seeking a declaration from the prison service that it is the internal policy of the prison not to execute a mentally disabled person.

The petition listed above is for President Halimah Yacob to issue a presidential pardon. Much of the mainstream media in Singapore is state-controlled and thus there has been little to no mainstream reporting of this injustice. The movement in Malaysia has been putting out statements and holding protests for the execution date to be vacated and the death sentence reviewed. See this statement by Malaysians Against Death Penalty and Torture.